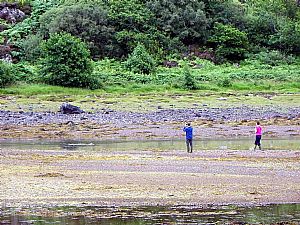 On 13th August 2012, York-based friends of SLEF Jane Thomas and Chris Hayes, staying at Nostie, watched an otter for a considerable length of time as it foraged in the burn where it runs into Loch Alsh. James Merryweather, who was visiting them at the time, stayed put by the cottage while they crept forward as quietly as possible, until they were able to watch from only c. 10 m away (picture).

The otter was totally oblivious to the presence of two excited humans, and Jane was able to take lots of dramatic close-up photographs while Chris concentrated on movies, one of which can be seen HERE. It was so preoccupied for so long that the observers eventually left it to continue feeding, undisturbed. It never noticed them! From a distance we all watched through binoculars as it climbed out of the burn and trotted back along the bank, in a seaward direction, dodging from side to side as it investigated we know not what as it went. At a specific location it knew about and we didn't, it turned left, headed inshore and disappeared into the heather.

The following day, J & C investigated and were able to follow disinct otter trails from the shore inland, marked by an otter with fresh spraint (carefully placed depositions of fishy-smelling faeces).